Carpal Tunnel Syndrome (CTS) is a medical condition that causes numbness, pain, and discomfort in the hand, afflicting an estimated 75 million people globally. Treatments for CTS are generally successful, but early diagnosis is important. Our team of plastic surgeons at Samra Plastic Surgery in Monmouth County use state-of-the art techniques to correct this issue, offering healing and relief to our patients. 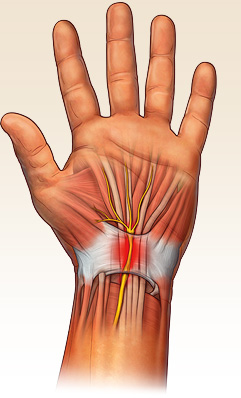 Symptoms: The most common symptoms of CTS include numbness, tingling, burning, weakened grip or pain that may extend from the fingers to the shoulder. Symptoms may occur in one or both hands, and frequently occur at night.

Causes: In the center of the wrist there is a space called the carpal tunnel, where a major nerve (the median nerve) and nine tendons pass from the forearm into the hand. The roof of this tunnel is formed by a strong ligament called the transverse carpal ligament.

Swelling in the carpal tunnel may be caused by heredity, diabetes, thyroid problems, fractures or arthritis. Fluid retention during pregnancy may create CTS symptoms, but these symptoms will typically go away after delivery. Repetitive hand motion and activities that involve grasping, squeezing or clipping can make the symptoms worse; but for most people the actual cause is unclear. 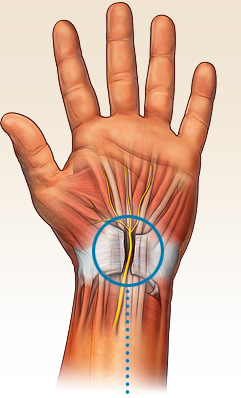 Non-surgical treatments may include behavioral changes such as reducing or eliminating repetitive hand motion, wearing wrist splints at night or receiving anti-inflammatory medication taken orally or injected into the carpal tunnel.

Surgical treatments vary, but the two most common are: Open Surgery and Endoscopic Surgery. Both procedures share the goal of easing pressure on the median nerve by surgically cutting the transverse ligament and thereby enlarging the carpal tunnel to make more room for the nerve. Both procedures are effective, but Endoscopic Surgery results in faster recovery time, less post-operative pain and a smaller, less-noticeable scar.

Swelling in the carpal tunnel may compress the median nerve, causing CTS. Surgical treatments cut the transverse carpal ligament to make room for the nerve. Eventually new tissue will fill the gap where the ligament was cut.

During single-portal Endoscopic Surgery, a small incision is made in the crease of the wrist, where the surgeon inserts a small camera mounted to a surgical instrument called a SmartRelease™ ECTR. This device allows the surgeon to see inside the carpal tunnel using a video monitor. The surgeon then precisely cuts the ligament using a retractable blade within the SmartRelease™ ECTR, without opening the entire palm. Once the ligament is fully released, the blade is retracted, the instrument is withdrawn and the small incision is sutured and dressed.

The guiding principle of this minimally invasive procedure is to minimize post-operative pain by avoiding an open incision extending from the wrist across to the palm. Endoscopic Surgery is highly effective and has been used for more than 20 years. It results in less post-operative pain, a minimal scar concealed by a wrist crease, and generally allows patients to resume some normal activities in a short period of time.

During Open Surgery, an incision is made from the crease of the wrist toward the center of the palm, through layers of skin, fat and connective tissue. Once the transverse ligament is exposed, the surgeon cuts the ligament with a blade to release pressure on the nerve. The surgeon then closes the incision with sutures and dresses the hand.

This procedure is effective; but it may not be the best option for some patients because it leaves a scar from the wrist to the center of the palm; and recovery and rehabilitation can take several weeks due to post-operative pain, the deep cutting of the hand and a longer incision. 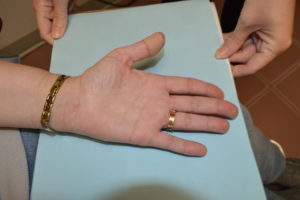 Our patient 5 months post-op with a very inconspicuous scar on her wrist. 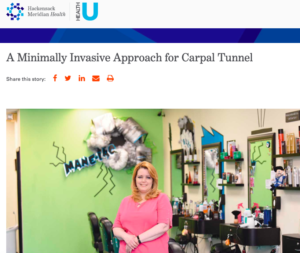 Click here to read about this patient’s journey in Hackensack Meridian Health’s HealthU.